Meet Peter Stafford Wilson, the Music Director and Conductor of the Symphony

Peter Stafford Wilson became the Springfield Symphony Orchestra’s eighth music director in 2002 following a national search, and in the ensuing years, he has brought new excitement and energy to the ensemble, which currently is enjoying renewed critical and audience acclaim.

Internationally renowned artists such as Hilary Hahn, Andre Watts, Twyla Robinson, Pepe Romero, and Misha Dichter have shared the stage with Wilson and the SSO, and leaders from the Orchestra have also had their turn in the soloist’s spotlight. Adventuresome programming, such as a complete cycle of the Brandenburg Concerti of J.S.Bach performed in the course of one evening, and a dramatic pairing of tone poems by Respighi played consecutively, and the juxtaposition of style such as Bach and Piazzola, back to back,  have marked Wilson’s style, as has the occasional warhorse encore. Emerging talent has also been the hallmark of Wilson’s taste in soloists including the electrifying appearance of 2007 Cleveland Piano Competition winner Alexander Ghindin,  Yehudi Menuhin Competition medalist Chad Hoopes, and regional phenom Gavin George. The celebrated Cirque de la Symphonie has made two visits to collaborate with the SSO, both resulting in capacity crowds at the Kuss, and the regular presentations of The Now Device have drawn wide interest.

International attention has focused on the SSO for events such as Agriculture & The Arts Growing Together, a photo-choreographed collage of images of local farmers at work set to the timeless music of Aaron Copland, and the American Made: A Celebration of Manufacturing, a multi-media program conveying the story of American manufacturing through video images set to the music of contemporary American composers. In 2011, Wilson enlisted the aid of Wittenberg University’s Dan Fleisch and Steve Reynolds to produce a new multi-media, multi-discipline production of Gustav Holst’s The Planets, which resulted in a sellout house. His ongoing collaborations with Seattle based The Now Device, have resulted in cutting edge, stunning multi-media productions. Springfield’s Choice, an on-line audience poll has wrapped the Springfield audience into the programming process, and Wilson’s passion for the Springfield community is well evidenced by his collaborations with local artists and institutions such as Wittenberg University, Choral Arts Springfield, and the Clark State Community College Theater Department. In 2009, the Orchestra took on the bold initiative of presenting a living composer on every concert of the season. The composers were on hand to engage the community as well as consult on performance, and the project resulted in an ASCAP Award for Creative Programming.

Wilson’s desire to actively engage the public in the music-making process is evidenced by his rejuvenation of the SSO Chorale, a volunteer vocal component to the Orchestra, and his NightLights series which has elicited high praise for its creative programming and relaxed atmosphere. Henry Fogel, President and Chief Executive Officer of the League of American Orchestras recently commented on a Night Lights event he had witnessed, “It was a great pleasure to spend the day recently with the Springfield Symphony Orchestra and in particular hearing the wonderful concert, an extremely imaginative program that was splendidly played by the Orchestra. You should be very proud of what this Orchestra has accomplished.” Of a recent collaboration with the SSO Chorale and the Orchestra, the Springfield News-Sun reported, “Joined by 84 members of the Springfield Symphony Chorale and four vocal soloists, a spectacular, well-balanced performance of Haydn’s Lord Nelson Mass in D minor ensued. Maestro Wilson displayed exceptional leadership as he pulled every ounce of musicianship from the combined ensembles. This evening proved once again that community spirit can indeed result in great musical collaboration. Bravo Springfield!”

Wilson’s commitment to the young concertgoers and musicians of the Clark County area is well evidenced by his annual leadership of the SSO’s Concerts for Young People, a collaboration with the Clark State Performing Arts Center and the Kurt Weill Institute at Carnegie Hall,  and his watchful eye (and ear) over the Springfield Youth Symphony.

A native of North Carolina, Peter Stafford Wilson studied at the University of Cincinnati’s College-Conservatory of Music, where his primary mentor was the late Thomas Schippers. During his years at CCM, he became a leading exponent of contemporary music, often collaborating with faculty and student composers, including the Conservatory’s Visiting Professor of Composition, Lukas Foss. Mr. Wilson also studied at the Aspen Music School where his teacher was Dennis Russell Davies, Eastern Music Festival (on whose faculty he subsequently served), Pierre Monteux School, Boris Goldovsky Summer Opera Institute and Rome’s Accademia Nazionale di Santa Cecilia where he was associated with Franco Ferrara. After his advanced studies, he was appointed Assistant, and later Associate, Conductor of the Canton Symphony Orchestra. While in Canton, Wilson established the Canton Cultural Center for the Arts’ Mary and Louise Timken Young Artists Competition.

Wilson recently assumed the role of Principal Conductor for the Tulsa Ballet, where he leads three to four major productions per season. The Tulsa World recently commented, “Conductor Peter Stafford Wilson led the Tulsa Symphony in a performance of the Tchaikovsky score that was bright and sparkling. The tempo was brisk, the articulations crisp and the orchestra’s sound was remarkably rich.” During his tenure with BalletMet Columbus, Wilson led over 100 performances, and travels with the Company annually to appear at the Detroit Opera House.

The Cincinnati Symphony Orchestra appointed him Regional Pops Conductor for the 1995 summer season, during which he led the orchestra in a series of widely acclaimed performances in Ohio, Indiana and Kentucky. Wilson also serves the Westerville Symphony as Music Director, and has recently concluded a 28-year tenure with the Columbus Symphony Orchestra.  Mr. Wilson also has enjoyed a multi-year artistic relationship with The Cleveland Orchestra, often serving as cover conductor for Severance Hall and Blossom Music Center events. In 1996, the League of American Orchestras featured Wilson in its Conductor Preview event, a program encouraging emerging conducting talent in the U.S.

Peter Stafford Wilson’s schedule has taken him around the world! He has guest conducted the orchestras of Bozeman, Chautauqua, Dallas, Detroit, Charlotte, Indianapolis, Kansas City, Louisville, North Carolina, Phoenix, Roanoke, Seattle, Syracuse, Tucson, Tulsa, West Virginia and Youngstown. He also led the Independence Day Concert with Peter Nero’s Philly Pops Orchestra and the Northeastern Pennsylvania Philharmonic’s highly popular “Awesome Classics” series, the Orquesta Filarmonica de Montevideo, the Hong Kong Sinfonietta, and the Shenzhen Symphony.  He maintains an ongoing relationship with Cedarville University, which began in 2008, and in 2012-2013, he served the University as Interim Conductor of the Cedarville Orchestra.

No stranger to the lyric theater, Mr. Wilson has held the positions of Principal Conductor of South Carolina’s Opera Charleston and Music Director of the Ohio Light Opera and conducted performances at Spoleto Festival USA, Young Artists Opera Theater, College Light Opera, Canton Lyric Opera and Otterbein College Opera Theatre. His regular tours with the Columbus Symphony Youth Orchestra have taken him to Europe and on a highly acclaimed tour of China, where he conducted a performance on the Great Wall of China! He has appeared at New York’s iconic Carnegie Hall on two occasions with the CSYO.

Wilson’s accolades include the 2018 Educator of the Year Award from the Greater Columbus Arts Council, the George Hardesty Award for Leadership for service to the Columbus Symphony Orchestra, Honoree in recognition for his contribution to the arts during the City of Westerville Year of the Arts in 2013, and Best Music Director in the Columbus City Scene Magazine Reader Poll, Best of the ‘Bus.

When not conducting, Wilson actively enjoys golf, reading, is an avid gourmet cook, and wine enthusiast, and surrounds himself with music of all kinds. His wife Barbara Karam Wilson is Director of Corporate Tax at White Castle System, and together they serve as staff for their two cats, Murphy, who has shown an uncanny affinity for the works of Mozart, and a rescue-kitty, Smidgen who seems to prefer The Black-eyed Peas. 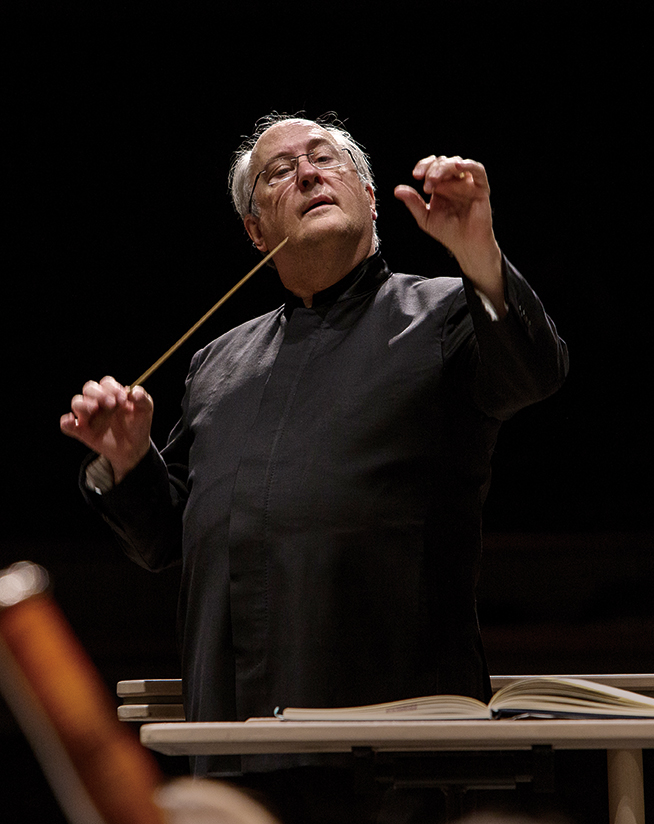